Oh, night time chores! Yeah, they actually live up to their name because they can be well… quite a chore to have to do. It’s not that it’s really hard work or anything; we just basically have to go out, gather eggs, and close up the coops. Sounds pretty easy, right? Well, it is except that we have to go out after dark because there’s a small group of chickens that like to stay out until the last possible second before the sun sets. It’s just kinda creepy, especially being out in the country, to have to go out in the dark. We just really don’t know what kind of critters might be lurking in the dark shadows.

Most of the time, it’s just small things. Like in the spring and early summer, when we head out with our flashlights, we get bombarded by June bugs, moths and every other bug that’s attracted to light. One time when my son was still living here, he saw lights flash across his window, so he glanced outside. He said it looked like a disco ball was lighting up the yard and then he realized it was just Brooke and me getting bombarded by bugs while walking to the barn. Then there’s the late summer, when the big spiders come out after dark and spin huge webs in random, unexpected places. Michael ran into a web once and got a big spider on him. He knocked it off and did a slight boogie dance. He’s not afraid of spiders nor have I ever seen him do a boogie dance before… so yeah, those spiders are that creepy. During the time they are out, one of us walks ahead with the flashlight and scans the area for webs as we go. Sometimes it’s like a maze just getting to the barn. These are just a couple examples of things we encounter during nightly chores. It’s nothing that will really hurt us, but it’s enough to make night time chores pretty creepy.

Then there are the bigger things that lurk in the shadows. Like skunks… I’m terrified of them. Luckily, knock on wood; I haven’t had an encounter with one of those yet. But I’ve smelled one several times… let’s just say if I ever saw one… well, I don’t really think you want to know what would happen. Coyotes are another critter I’m also scared of. One time I went out by myself and as I was walking to the barn, I heard a pack of coyotes that sounded pretty close. Once I got to the barn, the guineas got stirred up about something and they started squawking and chattering like they do. I was telling them to “shut up!” because I was scared it would attract the coyotes. I couldn’t get the eggs gathered fast enough! By the time I turned the lights out and shut the barn, the coyotes sounded like they were just right across the road. I ran back to the house, probably the fastest I’ve ever ran in my entire life.

Now you can understand why we get a little creeped out when we go out there, right? Well, a couple weeks ago Brooke and I went out to do chores. We were doing as we usually do, you know, just getting them done as quickly as possible and being on guard for anything that might happen. When we entered one of the coops, I noticed these beady little eyes looking at me. At first I thought it was a cat, but then when I looked again I saw it was a possum. So, as you can imagine, we both screamed, bailed out of the coop and ran to the house.

Michael was already in bed so I went and woke him up to see if he’d get it out of the coop for us. He was a really good sport about it, got dressed and headed out there. It took him a little while of chasing it around and around, but eventually he got it out. I really wanted him to shoot it because I didn’t want to have to worry about it returning another night. He told me he didn’t really want to get the gun out and all that, so he said to research possums and see what all problems they cause, and then we’d go from there. Well, I researched them and found out that possums are actually harmless. They can’t even carry rabies because their body temperature is too low for the virus to survive in their body. So once we found that out, we decided we’d leave him alone. A day or two later, our possum buddy came back and was in the coop eating chicken food again. Luckily, Michael was doing the chores that night, so he chased him out and so far he hasn’t returned.

So, now here’s craziest thing to ever scare us… Just a few nights ago, Brooke and I went out to do chores. Once we got to the coop that the possum likes to go in, we stopped. After shining the light all around, we determined there was no possum in there, and cautiously went in. We gathered the eggs, as we usually do and started to leave. Brooke, wearing rolled up fleece PJ pants and boots, stepped out right ahead of me. We have a hen that likes to roost on the top of the door way.  As I walked under her, she pooped. It bounced off my shoulder, and get this… it landed in Brooke’s boot, just as she was taking a step. Simultaneously, as the poop landed in her boot, a cat ran by and its tail brushed against the back of her leg. So as she stepped down, she felt something furry brush the back of her leg and then something warm squish on her heal.

As you can assume, Brooke freaked out.  She screamed and jumped around in circles on one foot while kicking her other foot and muttering something about a mouse in her boot in between screams. Between the combination of feeling the cat’s tail brush across her leg and something warm squish on her heal, she was convinced a mouse was in her boot. As soon as it happened, I started laughing… I just couldn’t help it. I was trying to say, “Brooke, its chicken poop” but I was laughing so hard the only thing I could get out was “Brooo….pooo…..Brooo….pooo…” Eventually I was able to say, “It’s just poop!” She looked at me all confused and asked how the cat would have gotten poop to fly up high enough to go into her boot. I told her it wasn’t cat poop, it was chicken poop and then went on to explain how it bounced off my shoulder and landed in her boot.

We heard Michael hollering from the house, asking if we were ok. He’d heard all the screaming and thought the possum was back again. I yelled back that we were fine and we’d explain once we got back to the house. I think Brooke and I stood there for a good five minutes laughing. Then she flicked the poop off her heal, luckily it was a solid one so it didn’t leave too big of a mess in her boot. She put her boot back on and we finished up chores.

Really… what are the odds?

It’s crazy how out of all the many things out there that could have spooked us… it was just poop! 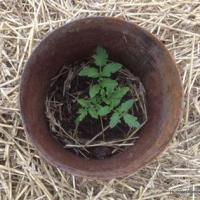