Before we started raising chickens, I never realized that there were different types of them. To me a chicken was a chicken, whether it laid eggs or was used for meat, I figured they were all the same. It wasn’t until I started doing research on the different types that I learned the differences between meat birds and layers. Even then, I still didn’t really believe there would be that much difference between the two when it came to using them for meat. It wasn’t until we tried butchering a couple of laying breed roosters along with some meat birds that I finally realized the difference.

The layer breed turned out rubbery and tough… so rubbery in fact; it was almost rubberier than a rubber chicken, if you can imagine that… 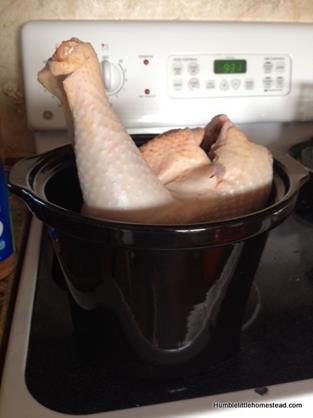 and the legs were so stiff I couldn’t bend them to fit in my crock pot. I don’t know exactly why they turned out so rubbery and stiff because we butchered them at the same time and did everything exactly the same as we did with the meat birds. Maybe it was the age of the roosters, they were over a year, or maybe they needed a longer rest period than the others. Who knows… all I know is I decided from then on, the only kind of chickens we’d butcher is the meat variety. Since then, we’ve raised several flocks of Cornish cross meat birds, and they’ve all turned out great.

This year when we were looking through the chick catalog we happened to see the Red Ranger meat bird breed. The thing that interested us the most about them is they are supposed to be better at free ranging and their legs and bodies are supposed to be more proportional so they remain more active, unlike the Cornish cross breed which tend to get so heavy they have trouble walking. We favor free ranging them versus keeping them in a pen and feeding commercial food because not only does it make them cheaper to feed but we feel the birds are healthier and a lot happier, which makes the meat healthier for us to consume. So we decided to order some Red Rangers to see how they compare.

Raising the Red Rangers was a lot easier. They seemed to prefer free ranging and ate a lot less feed than the Cornish Cross. We were able to offer unlimited feed and they never over ate. The Cornish Cross, on the other hand, were the complete opposite. We had to limit the amount we fed them because otherwise they’d over eat so much they’d lay down and not do any free ranging. I’d only feed them at night that way they’d sleep off their meal and be able to free range during the day. They seemed to always be in a state of constant hungriness and I felt sorry for them. 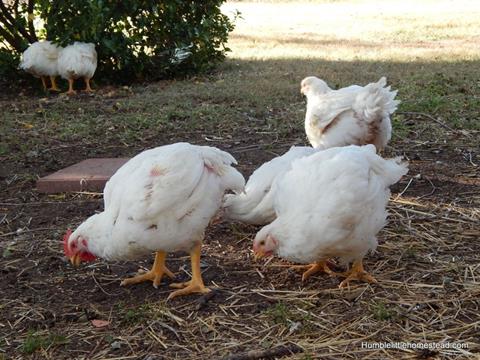 As you can tell from the pictures, the Red Rangers are bigger boned and more proportional. One other disadvantage of the Cornish Cross is they are a lot dirtier because when they get full, they lie down and don’t get up; even to poop, so they always have dirty back ends.


For us, when it comes to raising them, the Red Ranger wins hands down. They are more alert, cleaner, eat less feed, are more active and all around seem a lot healthier.

When butchering time came, I really didn’t expect much difference between them. You’d think butchering one breed of chicken would pretty much be the same as butchering another, right? Wrong. We found the Red Rangers to be more difficult and more time consuming. First of all, they were a lot harder to catch. We probably spent a good 30 minutes catching them all and penned them in the coop. The Cornish Cross were so easy to catch we were able to leave them running free and catch them as we needed them. The other difference between them is the feathers. As you can see in the pictures, the Red Rangers have a ton more feathers compared to the Cornish Cross. In fact, you can see the skin between the feathers on the Cornish Cross. So, as you can imagine, that made plucking the Red Rangers quite a job. When we did the Cornish Cross, I was able to pluck two of them in the time it took Michael and Brooke to get one gutted. So butchering them went pretty smoothly. With the Red Ranger, I couldn’t keep up, so Michael and Brooke had to also pluck in between gutting. Otherwise, there really wasn’t a lot of difference between the two.

Miley even joined in to help!

Comparing the meat, there are a few differences. First, the average weight for the Cornish Cross was eight to ten pounds after butchering; versus the average weight for the Red Rangers was four to five pounds. So, obviously, the Cornish Cross had a lot more meat. Taste wise, there wasn’t much difference from what I could tell. I did notice that the dark meat on the Red Rangers seemed to be slightly tougher than the dark meat of the Cornish Cross, but it wasn’t real bad. It could have just been the way I cooked it too. I haven’t cooked any since, so I will have to see what it’s like the next time I fix some. 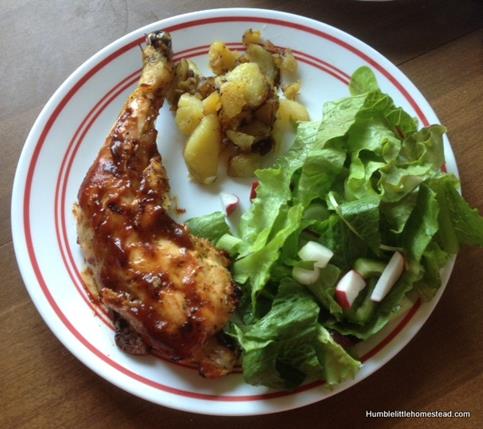 So, which breed is best?

It’s really hard to say, but in our opinion it’s almost a tie. Raising them, the Red Rangers win hands down because they are so much better at free ranging, consume less feed, and seem healthier. Ease of butchering, the Cornish cross win just because they are so much easier to pluck so butchering goes a little faster. Meat wise, it just depends on what you’re planning to fix. I’ve found the Red Rangers are excellent for grilling since they don’t have as much meat on their bones and the Cornish Cross are great for roasting. So this fall we’ll probably raise Cornish Cross since I do more roasting in the winter, then next spring we’ll get more Red Rangers to grill in the summer.