Things have been so busy lately that I’ve been kind of neglecting our little indoor garden we started a while back. The seedlings have grown lately and are pretty root bound. Plus I’ve been bad at remembering to water them so I’m actually surprised they’re doing as well as they are.

I had planned on getting them transplanted to pots a few weeks ago but my potting soil was outside. At that time, it was snowing and blowing out, so it was one big frozen blob. I brought it in to thaw out but I’ve never had a chance to get it done. My niece is out of school on spring break, so she’s hanging with us some this week. I decided transplanting the tomatoes and cucumbers would be a good project to keep her and Miley busy for the afternoon.

These tomatoes are Minibel, which grow to be only about a foot high and don’t require any support. They’re great for container gardening, so I thought they’d do well in our little garden. I’ve read mixed reviews on their taste, so I’m going to be interested to see how they turn out. 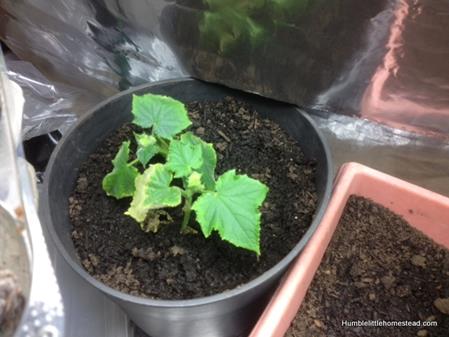 The cucumbers aren’t looking so great, I don’t know if it’s just from inconsistent watering, lack of nutrients, and being root bound, or if they have some kind of disease. I guess time will tell, hopefully transplanting will help them come out of it. These cucumbers are Miniature White, which produce small white pickling cucumbers. The plants are a bush type and aren’t supposed to get over three feet tall. Hopefully they don’t take up too much room under the grow light.

The lettuce has been really slow growing, it’s taken it months to get this far…

Then it dawned on me, it needed some fertilizer… that helped a bunch, in fact it’s grown more in the last couple weeks after being fertilized than it has since it was planted. I can’t believe I didn’t think of fertilizing it sooner. Last time we grew a little indoor garden I used a high quality organic potting soil, so I didn’t have to fertilize much and everything still grew well. This time I used a cheaper, not as good of quality regular potting soil and I can really tell the difference in how well things grow. If we ever do this again, I’m going back to the organic soil, its well worth the extra cost. This lettuce is Tom Thumb, which is an heirloom lettuce that dates back to the 1850’s. It grows small heads that are only 3″ to 4″ across, so I’m thinking it’s finally getting close to harvest. I just may harvest it anyway, whether it’s grown full size or not just because I’m tired of waiting for it to grow.  🙄

That pretty much sums up what’s happening with our little garden so far. Transplanting the tomatoes and cucumbers just made me even more anxious for spring to get here so we can get out in the big garden and get it going. I’ve been doing some planning for it and have a big experiment planned to try. Can’t wait!

Are you planning out a garden? If so, what all do you have planned to grow?